To VTEC and Beyond - EK B18C Build

Huge list of pictures coming through in the next post, stoked to get it all on the car and book my next track day.
8

Big update this time around. Got a fair bit done over the weekend.

Headed back to my mechanic's place to get the lip + splitter, RTA bushes and some new camber arms fitted.

Overall pretty smooth day, splitter took a lot longer than expected, but I got to experience taking the front bar off and I've never done that to any of my cars and I feel like things are getting pretty serious when your car is staring at you with no nose on

So first thing's first, I got a new set of Hard Race adjustable camber arms to go on the car, pretty neat in design, bushings looked healthy. Out with the old in with the new. The old camber arms were a lot less beat up than I originally imagined, but the adjustability should help with cornering on the track. 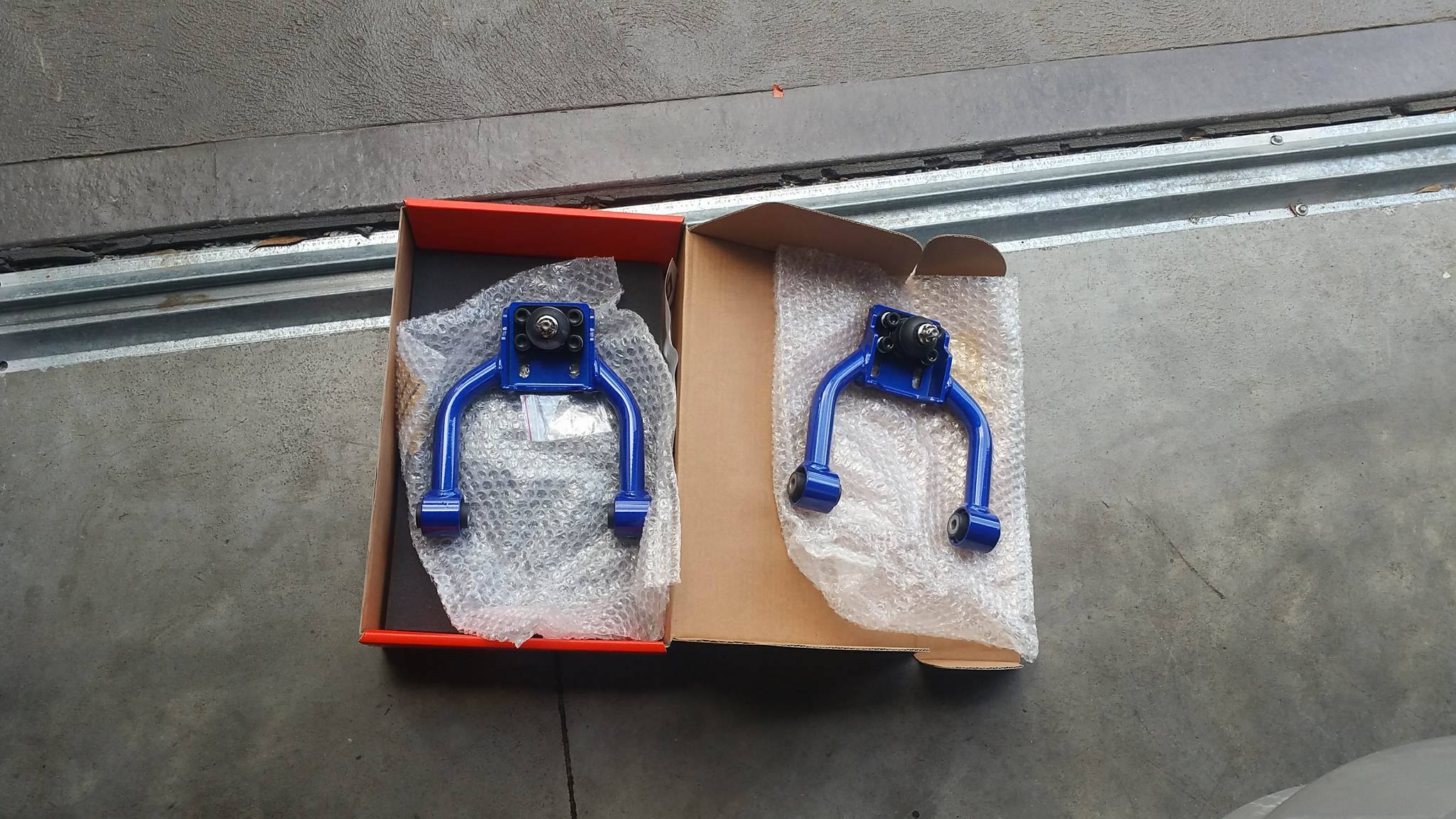 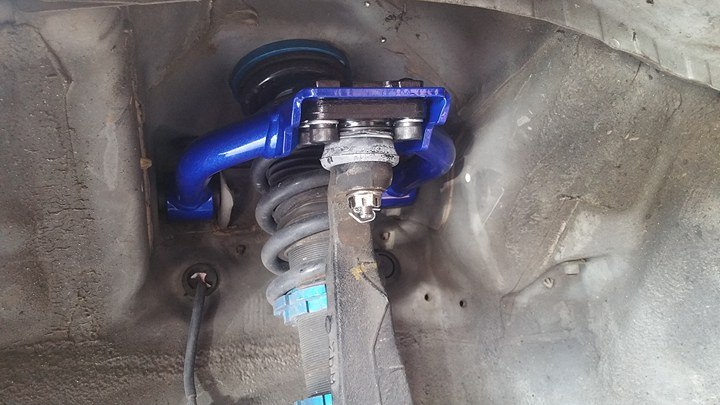 Next and probably more important than the last, the rear trailing arm bushes needed to be desperately replaced, and probably for good reason. It's been a good run of 20 years but I think it's time the old bushes get to retire. They withstood one track day well, not sure they many more left in them. Bush replacement was a Hard Race one. 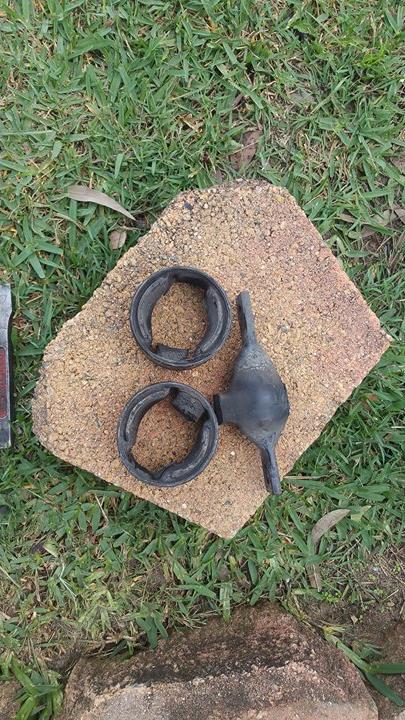 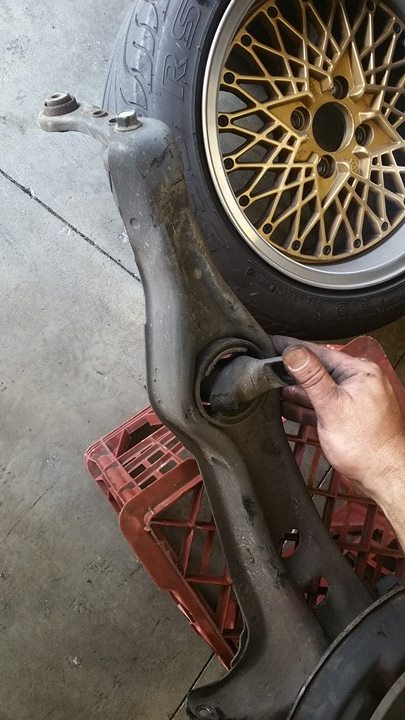 Fairly impressed overall, the rear end definitely feels a lot tougher and more obedient. The rocking of the arms due to an otherwise destroyed bush was probably to blame for a loose feeling rear end (no sexual connotations intended ).

As a side note, it's pretty amazing how dusty the Project Mu pads are. The calipers (used to be) were black but they are completely covered in a really thick coat of dust. I sorta like the industrial look so I decided to not clean them 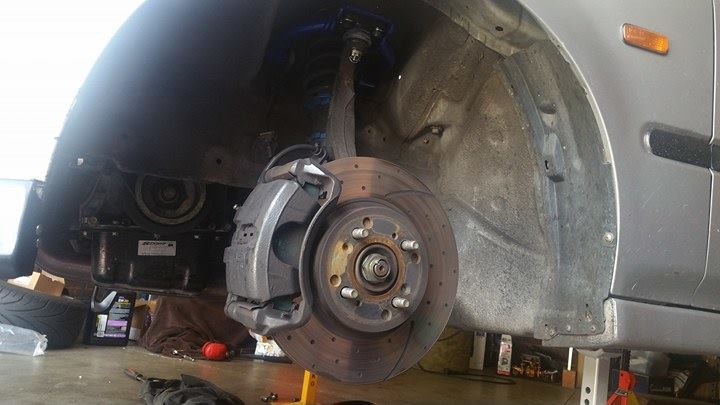 Thought I'd start draining the oil while doing other things. Sure enough I managed to completely miss the container and got half of it on the floor. Oh well. 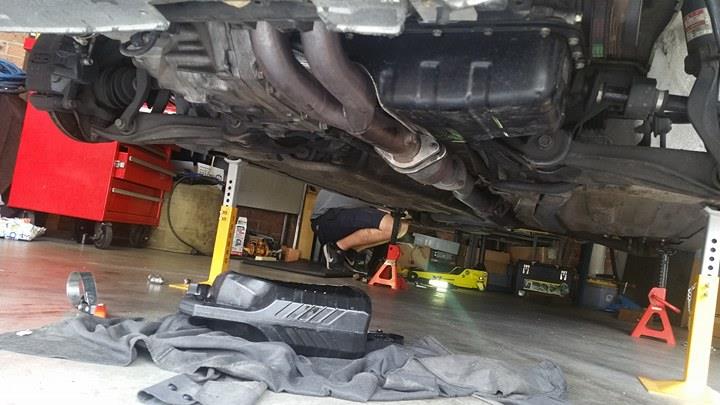 Now to the fun part of the day. We got the lip fitter, more sturdy and firm than I've ever had one on before. Really wanted to make sure the lip and splitter were a very sturdy combination. 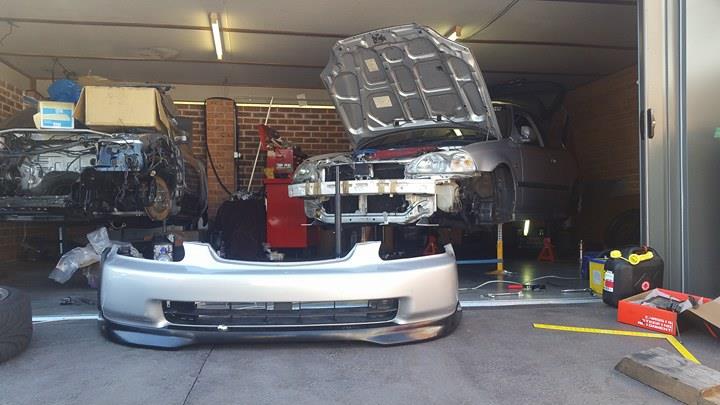 So the splitter stuck about 13mc from the base of the lip outward. This had a really, really cool look and the inner me really wanted to keep the splitter and the original size to make it look as ridiculous(ly cool) as possible. Unfortunately car laws are fairly strict here so the more mature me decided to take the more practical route and cut a bit off the splitter to slide the undertray further back, in order to slice a few mm off the front... the compromise was 5cm poke which is definitely more sensible and driveable than 13... if I decided to rock the full 13cm poke it'd probably only be a matter of time before I get hassled about it 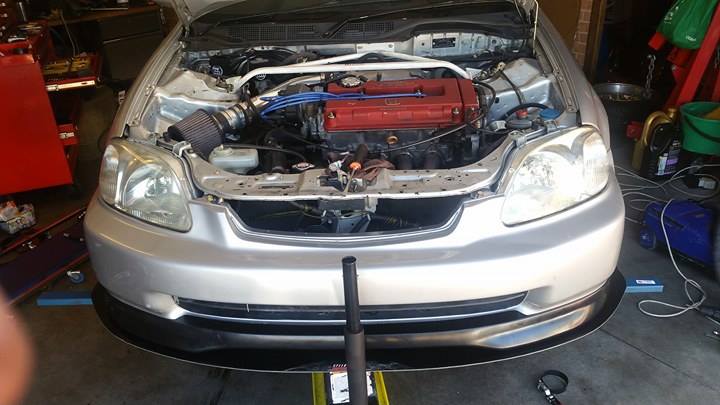 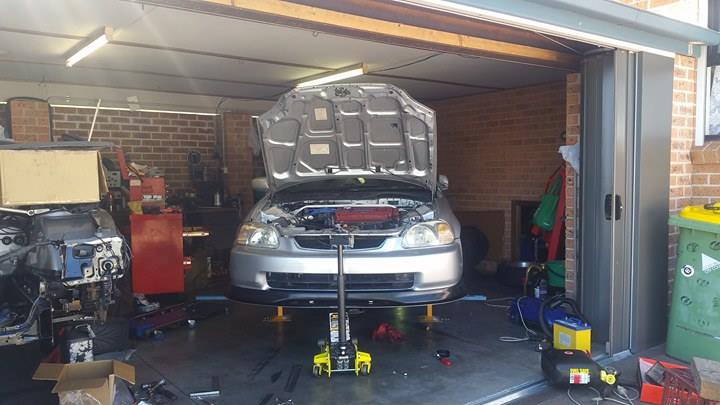 Clearance was a real concern for me, I know splitter needs to be quite low for any real benefit but if I want to keep it on for daily driving it's not really an option since I need the car to get to work with everyday.

Fairly happy with how the clearance worked out once it was on the floor. Can still get in and out of driveways. I'll be a very happy camper if I can get over one particular steep-ish driveway at work tomorrow but time will tell. 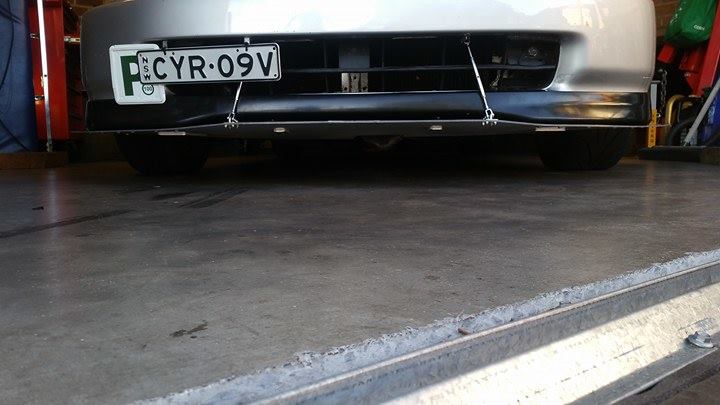 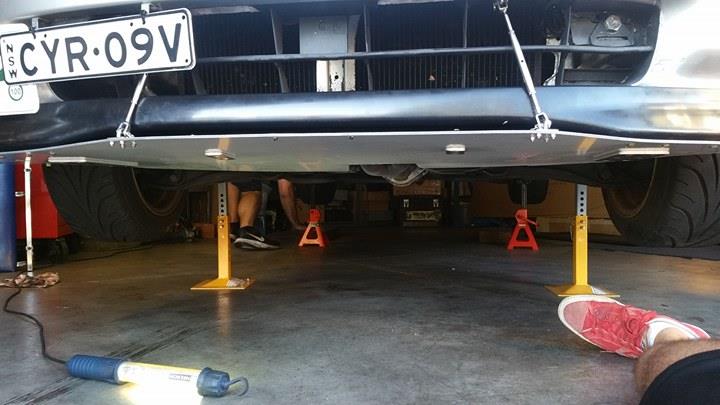 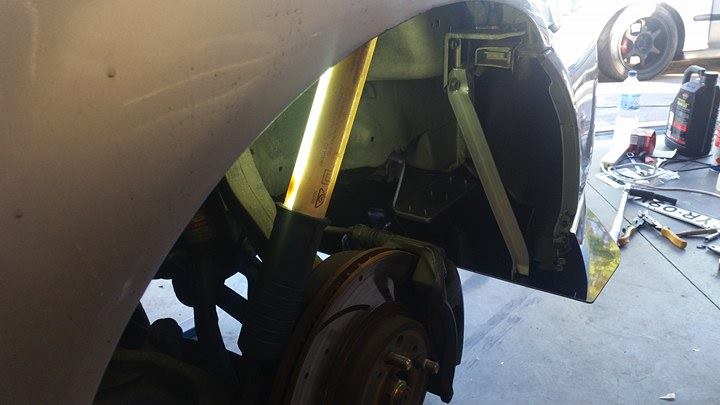 That's pretty much it, got everything in before sun down and rotated my wheels (back to front, front to back)... unfortunately found the wheel balancers were scrubbing against my caliper so I had to knock them off. Will have to get them rebalanced when I go for an alignment next. 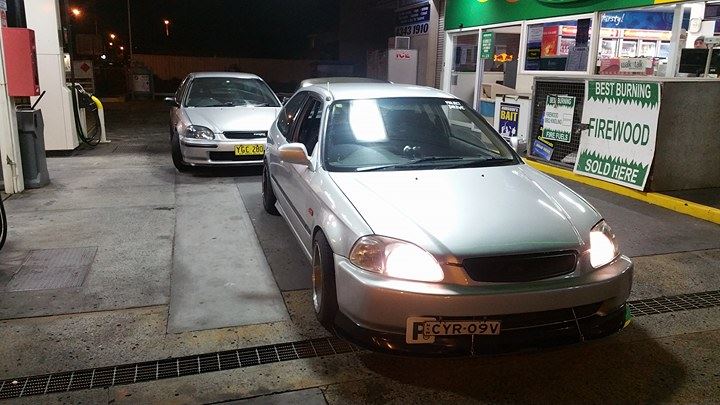 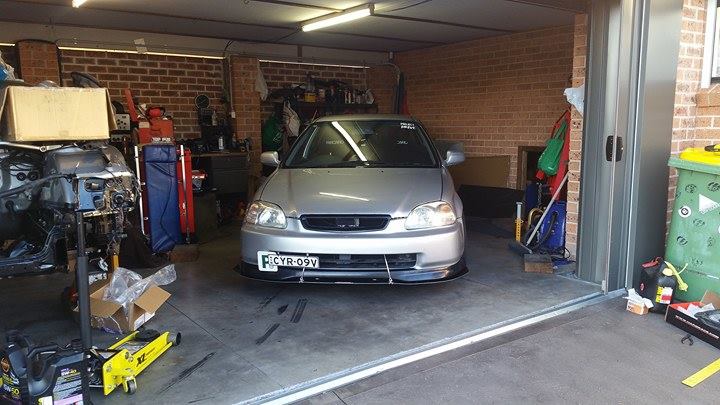 This will probably have to do for the next few months, would like to get some seat time before I start spending more on modifications, and after all this work I don't think I can budget in any more modifications for a little while.

Next up on the list I'll need to replace my rear LCAs as the bushes in the old ones are pretty beat, may as well just stick some new ones in there.

On the to do list though and as the next big-ish project, I'd like to swap a DC2r sub frame and rack into the car for the shorter steering ratio, and possibly if my budget will allow, to purchase a second set of wheels (probably Enkei RPF1) and have one set of wheels for the street and one for the track so I can put some really sticky tyres on the track set without worrying about wearing them down on daily driving.

Till then I'll have to settle with a few cheaper things to keep me satisfied until I have enough to put aside for a new sub frame. Hopefully I'll get around to painting my valve cover in the next few weeks.
Last edited: Apr 4, 2017

Nice update, more seat time before any further modifications is probably a smart call.
I found with 3" of poke on my first splitter that it made such a difference i was actually slower for having to correct the rear the whole time. So youve probably done yourself a favour on track aswell by having less.
8

jesse888 said:
Nice update, more seat time before any further modifications is probably a smart call.
I found with 3" of poke on my first splitter that it made such a difference i was actually slower for having to correct the rear the whole time. So youve probably done yourself a favour on track aswell by having less.
Click to expand...

Oh that's awesome, I was sort of upset when I had to cut the splitter down thinking I might lose a lot of function but unfortunately it just wasn't practical. Nonetheless I'm no professional and I'm sure it will do the job just well with my average speed of probably 150km down the straight and ~100 corner speeds, probably nothing to stress about.

Need to put a gopro or something on the shopping list as well at some point, I've always wanted to watch some footage of myself driving.

Also means you can share the experience with us.

Nice build so far mate! Interested to see how the splitter improves performance as I'm looking at something like this.

Yeah, super keen to share my experiences, it's really cool watching the footage on the build threads here and seeing normal people driving fast cars they built with their own money.


EK9 Matt said:
Nice build so far mate! Interested to see how the splitter improves performance as I'm looking at something like this.
Click to expand...

I'll definitely let you know. It definitely feels more stable on the highway (could just be a placebo though and my mind thinking it's more useful than it is) but won't know till I get to beat it around the track most probably. Hopefully that will be soon.

Also, forgot to post a few pictures of the new steering wheel. 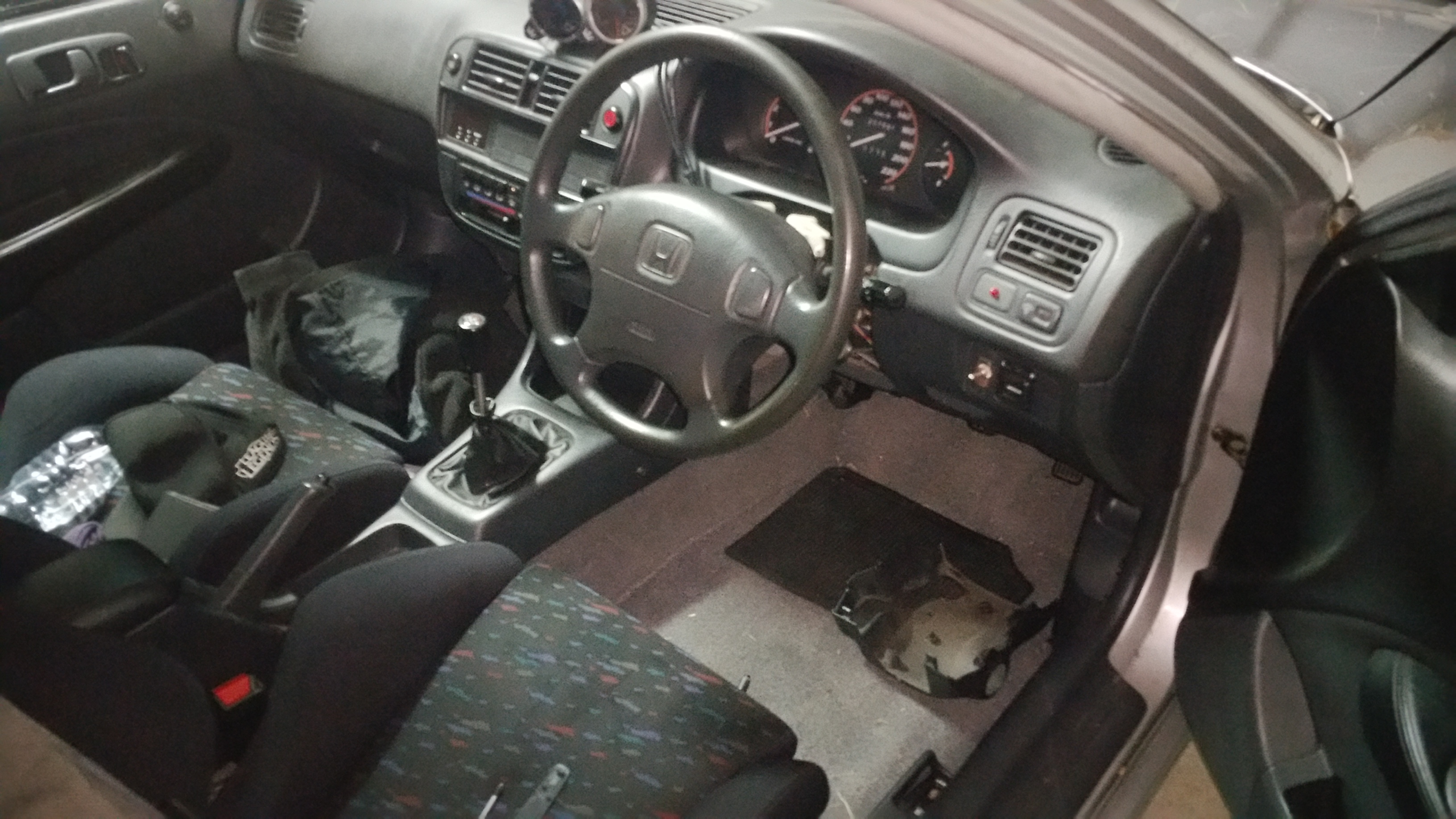 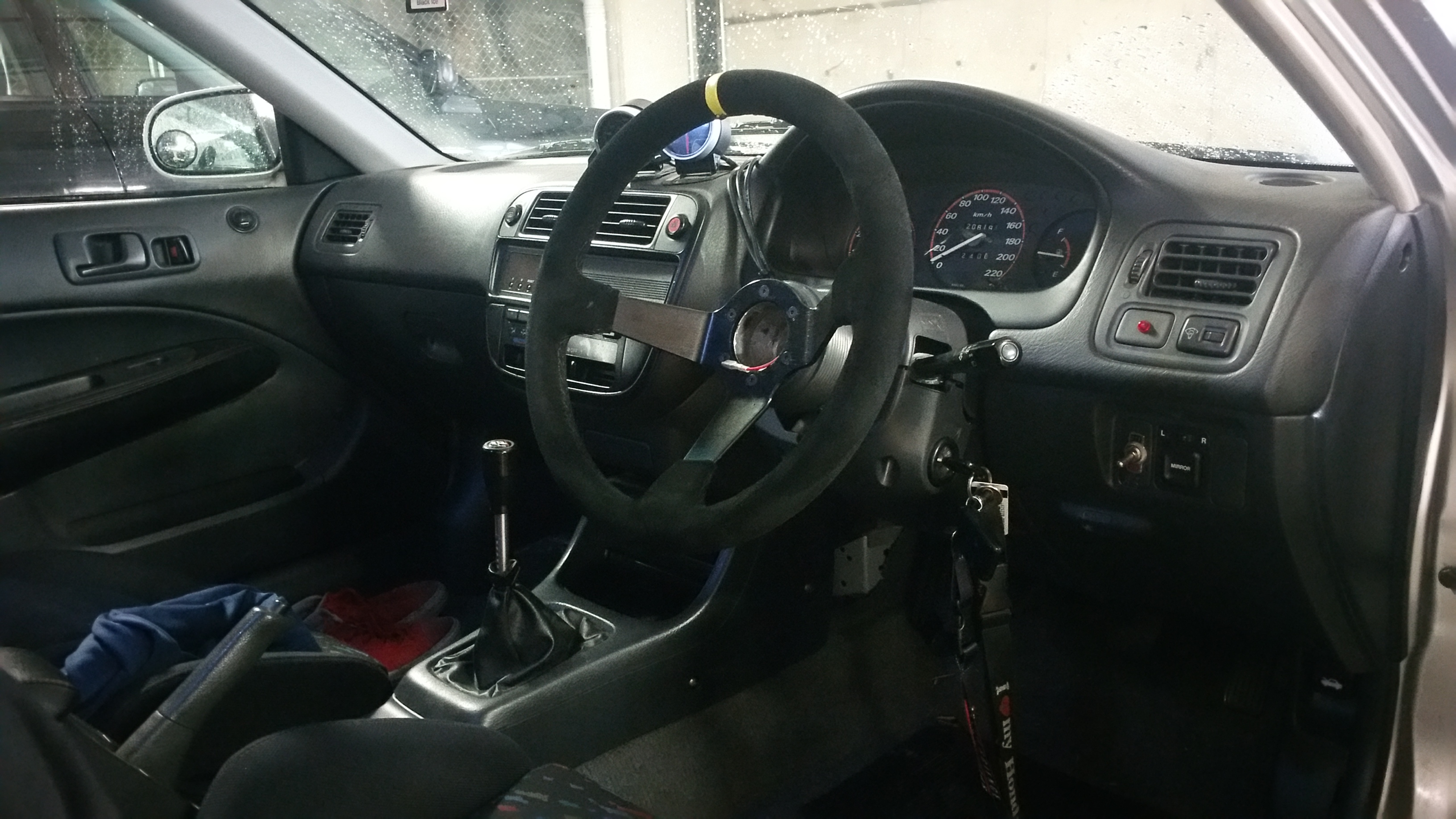 The steering wheel was one of the few things I got to do by myself, I don't do a whole lot of work by myself unfortunately, mainly because I don't have the space at home but luckily this was something I didn't need a lot of space for.
Last edited: Apr 4, 2017
8

Haven't updated this in a while.

No progress in terms of work done side from oil changes since the last post unfortunately, though I think that's for the better since I haven't had any more seat time since all this work had been done.

I've purchased a gopro at a really good price among the Christmas sales and will be purchasing tickets to a track day in February. Fingers crossed everything should go well, will probably pick up some Enkei RPF1s and some sticky tyres at some stage between now and the track day and possibly opt for a more aggressive clutch/lighter flywheel.