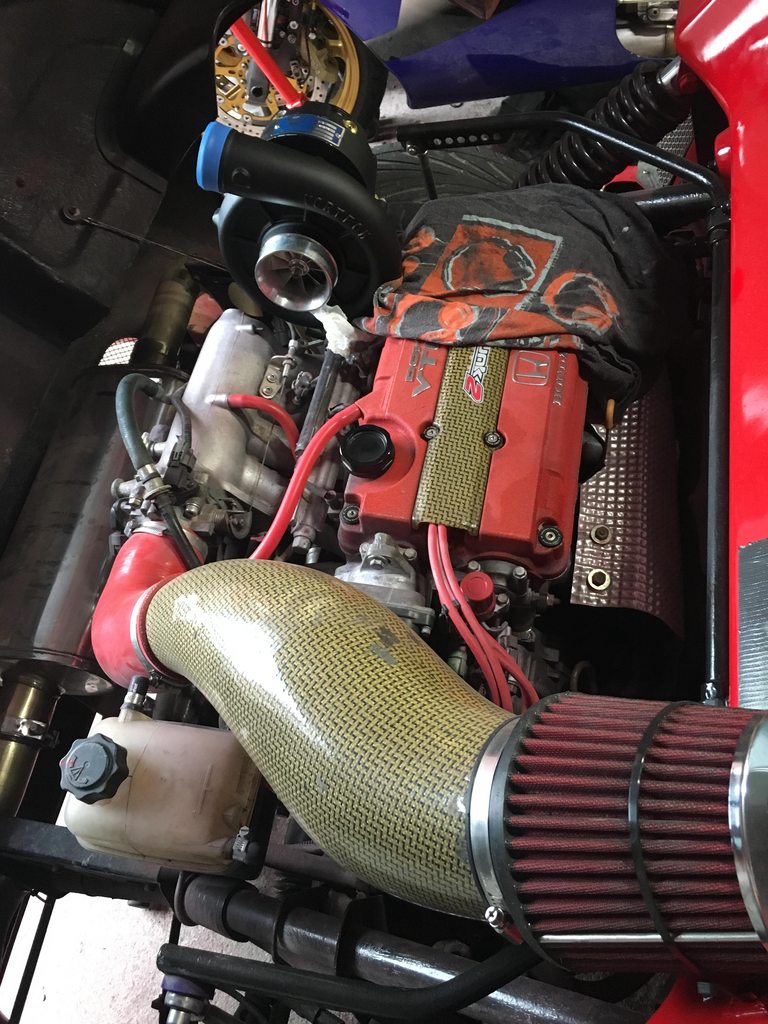 So after my first proper run out in the car for a full day and had a number of observations. Basically as great as the engine is it really lacks torque. It goes well when it's revving it's nuts off but that's just not what I want on the road. The other observation is that because of the 4.78 diff it's revving it's crackers off on the motorway too and my ears were near bleeding just cruising at 70.... it's just too much.

So I came away thinking that the car would be a hell of a lot better with more grunt and if I had more grunt I could change the diff so it wasn't always buzzing so bloody much.

Very early days but we'll see how I get on, I just came across this brand new vortech charger in the US for about a quarter of it's value and after doing all the research in the end it happened to be the one I'd settled on, if I ever decided to supercharge it - then hey presto one appeared!

It's a counter clockwise unit so no myriad of idler pulleys needed to make it run the correct way like I'd have to do if I used a rotrex which are clockwise only (my Honda engine spins backwards), it's also completely self contained, runs on its own fancy ATF oil so doesn't have to be plumbed into the engine oiling or have its own oil cooler and reservoir like a rotrex. So whilst it's a big unit it's actually quite neat.

I've got a few ideas with regards to set up but for the time being I just need to make some mounts and get it all aligned which I suspect won't be as easy as it sounds.

What I would like to do, and I know it has been done before is use some sort of boost control or bleed off with it. The problem with centrifugal superchargers is that you can only spin them so fast and most people pulley them up to produce whatever boost you want at max engine RPM.

What I'm toying with is making it hit it's maximum 52000rpm impeller speed at 8600rpm, but bleeding pressure off, meaning that at peak I'm still only going to be at 9-10psi, but it will make more mid range as it'll hit that plateau of boost much sooner, approx 1750rpm sooner. From reading into it this isn't something recommended for screw/roots blowers but it's perfectly do-able on a centrifugal unit and whilst people always purvey the idea of keeping it simple I don't honestly think it's going to be all that complicated to set up. After all it's not really any different to boost controlling a turbo set up, and like a turbo it will reach its maximum boost sooner (granted not as soon as a turbo) than if I just pulley'd it to run at say 75% of its speed, but unlike a turbo it shouldn't have any lag. It won't be forever bleeding off boost either, probably anything over 7000rpm it will be.

Anyway, we'll see. Plenty to get on with... still haven't even got the Z cars kit on the frigging thing.

Was you going to intercool it or just plumb it straight into the intake? Would be cool to see how you end up fitting a cooler on the car.
Y

Intercooled, possibly with fans on the intercooler to help a bit. After a bit of thought and our messages back and forth I'm wondering if there's even any point with the wastegate idea, I mean it'd be cool to be able to vary the boost but with a centrifugal supercharger being so linear completely variable with engine speed anyway I'm wondering I may as well just run it at it's max and be done with it. The unit is rated at max 14psi but from what I've read the guys running them flat out on their GT86/FRSseseses are seeing 12-13 psi. It's quite well sized for the engine as it is. Unlike a turbo the boost will rise with the revs directly so it's not like I'm running max boost all the time, just the potential to, depending on how high I rev it... if that makes sense
You must log in or register to reply here.
Share:
Facebook WhatsApp Email Share Link
Top